This weeks challenge was to make Minnie Mouse Cupcakes. After a tiring 3 nights of netball matches in a row I came home to the relaxing job of baking for a little girls birthday party.

If you saw my post about colouring frosting in my space cupcake post you will be aware that not all my challenges go to plan. And this was another. The frosting in my head was a vibrant red – not the pinky red I managed. I made up the first batch which was strawberry milkshake flavour so had a slight pink tone to it already, added some Christmas Red colouring and it just went a brighter pink. I added a bit more and it still went pink . So I started again with a vanilla frosting and this did the same. After reading up on the internet it seems that red is a hard colour to get due to the pigments in the butter and icing sugar. As they are heavy on whites/yellow it just turns the red pink. One tip was to add a bit of cocoa powder as this deepens the colour. So in the end, I mixed the vanilla frosting with the strawberry milkshake frosting and added a teaspoon of cocoa powder. The result wasn’t the bright red I was hoping for, but it was deeper than the hot pink it was at the start (although it looks pretty good in the photos – must have been good lighting!)! Apparently the colour also deepens over time but as these have already been delivered I can’t comment on that. Everyone online recomends the Wilton Red (No Taste) paste coloring.

I did start making these a week in advance as I only had one mould. Each evening I melted a few white candy melts in the microwave and then filled the bow mould. I popped this in the freezer for a an hour and then peeled it out.

I made Strawberry Milkshake flavoured cupcakes but you could make any flavour you wish. To make the frosting red make sure you use a food gel or paste – not the liquid ones you get in the supermarket. If you are having trouble with it going pink try adding some cocoa powder to deepen the colour.

Roll out a thin piece of white ready to roll icing or sugarpaste. Use the end of a straw to cut the dots out.

Roll out a thin piece of black ready to roll icing or sugarpaste. I used the lid of a cocktail stick pot to cut the ears out, but anything small and round is perfect. You could also use mini Oreos for the ears if you would prefer?! Putting it all together:

It’s as easy as that! I really enjoyed making these cupcakes and I hope they go down well at the Birthday Party. 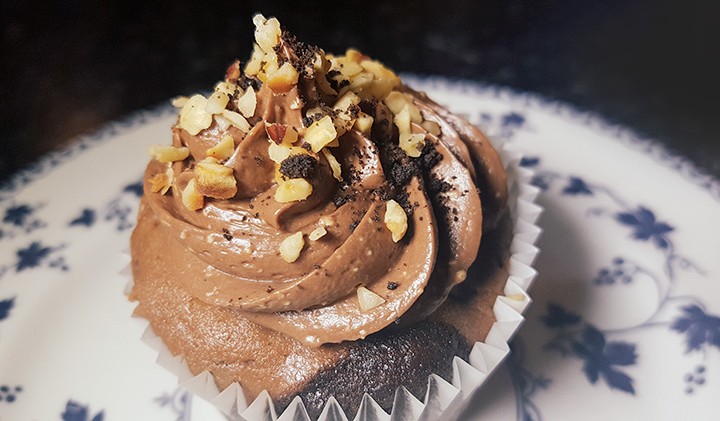 I had a busy day baking yesterday. I had promised a lot of people that I would bake them some cupcakes and I wanted to donate to a few macmillan coffee mornings so I thought I would get it all done together. So I baked triple chocolate cupcakes, apple pie cupcakes, black forest gateau…