Vegan Margarita Cupcake Recipe
By Rachel Howard on 01/13/2014
What the book says: These cupcakes have a lot going for them – lots of fresh lime juice, pretty green lime zest, and even a shot of tequila.

Happy New Year to all  my Sunday Baking friends! I know it’s been a while, but life has been pretty hectic over the last month or so (although I did manage to squeeze in a little holiday to Iceland for New Year which was pretty awesome!). I even had to turn down a pretty exciting cake project which was a bit upsetting but I suppose it means I can now share more recipes with you guys so there is always a positive. I feel 2014 is going to be a good year for cakes…I already have an order for 2 birthday cakes and a Wedding Cake!

Anyway – these were not what I thought I would be featuring as my first 2014 post. I was going to do a something a little ‘healthy’ seeing as everyone around me (including myself when I have the willpower) seems to be on a January detox. But no…I’m hitting you with the Tequila shots!

I had a small order for some Vegan Ginger and Lemon Cupcakes and as I had a lot of soya milk left over and half a bottle of Tequila in the cupboard I thought I would give these a shot.

They don’t look the best and I’ll be honest – I’m not overly sure about them. My husband took one bite and screwed his nose up at the sweetness which is no surprise. I tried them and my confused feelings were ‘Oh no they have a funny texture……lets try another one….I need another one (see what I mean about the willpower!) and I ended up eating 3. And I have just tried another today. They taste nice, it’s just the texture isn’t as fluffy as usual. Initially I wondered if they weren’t cooked, but when looking properly, they definitely are. Maybe it’s just the way they are meant to be. Ingredients for the frosting:

The Recipe book suggests adding coarse sugar crystals around the edge of the cakes which I did for one. Personally I didn’t like it – there was too much crunch. But maybe you like it that way.

So all in all, I have mixed feelings on these. I wouldn’t say I love them, but it didn’t stop me from eating 3 in a row…..strange. If there any Vegans out there that give these a go I would love to know what you think of them. Maybe it’s the texture a lot of Vegan cakes have so they’re all good?! Let me know!!! 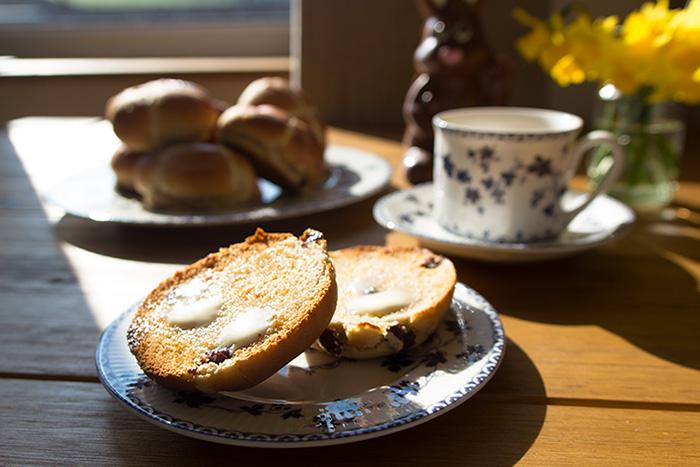 “According to ancient superstition, baking your own hot cross buns on Good Friday will help you win friends, influence people, protect against kitchen fires, and guarantee that all bread baked in your kitchen turns out perfectly…” I made mine on Easter Sunday – does that still count?! ha ha. I have never made hot cross…