These delightful cupcakes were simple to make and look great at a party. I was asked to make some for a little boys 2nd birthday and I hope he enjoys them!

Not having any children ourselves, I love the challenge of making children’s birthday cakes. I totally understand that some mums think it’s important to bake their own child’s birthday cake, but to be honest, I really don’t understand how you find the time. I casually made these little Lightning McQueens on Friday evening and then made the cupcakes and decorated them on Saturday afternoon so it’s not like they took ages but sometimes I don’t know how you mums do it.

If you decide to make these, this is how I did it…

I made Red Velvet cupcakes from the Hummingbird Bakery with a white chocolate frosting. Ingredients for the Red Velvet Sponge:

***While writing this post it looks like Dr Oetker have discontinued their red food colouring. I used a bottle I had in my cupboard so I cannot comment on what you could use as a substitute. They do have a gel colouring now, but I am unsure how much you would need. They also have a natural red colouring but it sounds like it’s not as vibrant and may not give you the colour you want. Please comment below if you find the answer!

Ingredients for the White Chocolate Frosting: A simple way to get all the icing colours is to buy a pack of ready coloured icing.

As you can see, I didn’t use any special equipment to make these. And even the edible glue could be substituted for water. It’s not as strong, but it would help pieces stick together!

Unfortunately I didn’t remember to take photos of making these cars, but I just followed this great tutorial.

I only made a few cars, and then topped the rest of the cupcakes with fondant number 2’s and large wheels (that looked a bit like records) spelling out the birthday boys name. Lightning strikes would also be a great idea. As always, when making cupcakes I always make a few extra so I can taste test them. I tried the frosting when I made it and wasn’t keen, but when eating both the cake and frosting together, it works. Beautiful moist and fluffy cakes with a sweet white chocolate topping.

« How to make a Pizza Cake
Coffee Cake Cupcakes » 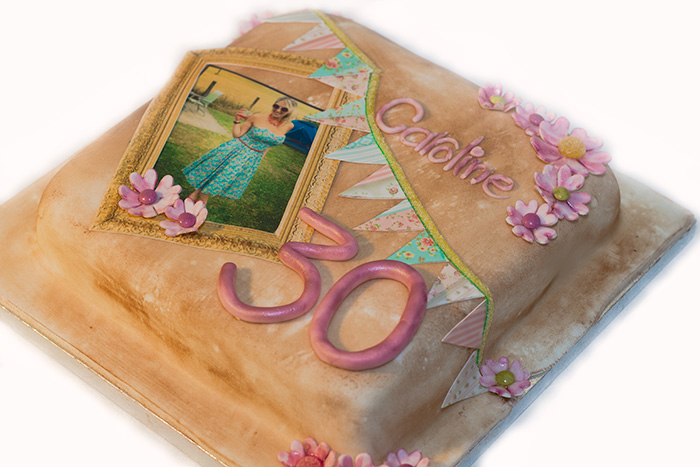 After a week of pain (in more ways than one!)  it was a welcome distraction when I was asked to make a birthday cake for a friend of a friend. Vintage Shabby Chic was the brief…so I set to the trusty internet to find some inspiration. I couldn’t find anything that I liked the look…