Vegan Chocolate Peanut Butter Cupcakes With Peanut Brittle
By Rachel Howard on 04/05/2016
A light and fluffy chocolate sponge topped with a creamy peanut butter frosting. All topped off with some home made peanut brittle.

Just lately my baking bug has come back in full swing. Over the weekend I made a chocolate cake, vegan banana split cupcakes and a raw, sugar free, gluten free blueberry and cardamom cheesecake (all recipes to follow shortly!) and then last night I made these vegan chocolate and peanut butter cupcakes.

I have decided to share these first as they got the most attention and the most requests for the recipe.

I have made a variation of these before and they were really good. These were extra good and everyone that had one seemed to agree. It was a last minute decision to make the peanut brittle. I wanted to top them with something and this seemed to work. And there was plenty left over to snack on. Recipe taken from Vegan Cupcakes Take Over The World.

Ingredients for the chocolate cake: Ingredients for the peanut buttercream: Ingredients for the peanut brittle: If you’re a peanut butter lover you cannot miss out on these. I’m not vegan, but the cake is so light and fluffy I would make these over regular chocolate cupcakes every time. 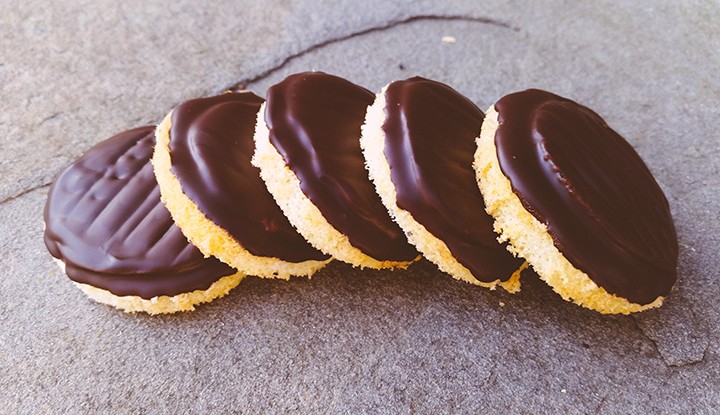 I’ve been a bit pre occupied recently as I have had a lot going on. Last night was the first time I have sat down and actually watched The Great British Bake Off this series! However, my husband has been watching and a few weeks ago he requested some home made jaffa cakes as…