The other week I mentioned the idea of Baileys Cupcakes in the office. The squeals of excitement were unanimous so I promised the team I would make them.

The main ingredient I struggled to find was the Irish Cream chocolate. I knew I had seen this so thought it would be easy but I now think it may only be easy during the Christmas season as it’s no where to be found. Thank goodness for the lovely Old Fashioned Sweet shop on Poole High Street!

However, after making these I would say don’t bother going out of your way for the chocolate! It didn’t really work or add anything in my opinion.

These are super sweet cupcakes so only make them if you can handle a massive sugar hit!

To make these Baileys Cupcakes you will need: Ingredients for the chocolate buttercream

Ingredients for the Baileys buttercream As this recipe only makes 9 cupcakes I decided to double it. My advice?…If you are going to double the cake mixture there is no need to double to icing amounts unless you like loads of icing on your cupcakes! I have ended up with 2 tubs of leftover icing!!

As I mentioned earlier – I was expecting the block of Baileys chocolate to melt into the cake and go all gooey but it didn’t. It just stayed as a random block of chocolate in the cake.

Personally I found these to be a bit too sickly. But everyone seemed to enjoy them so I don’t think they were as bad as I was making out. « How to make chocolate truffles
Sunday Baking now has a Facebook page! » 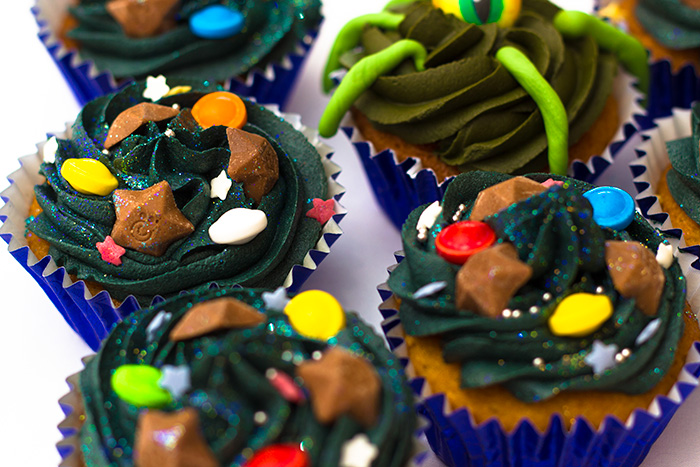 A little while ago I mentioned a baking disaster but I forgot to share it with you. Back in the summer we went to a 3 year olds Birthday Party. And this little 3 year old was having a Space themed party so I thought I would take along some cupcakes. The idea was…