Vegan Sticky Gingerbread Cupcakes with a Vegan Lemony Frosting
By Rachel Howard on 11/24/2013
Moist, fluffy gingerbread cupcakes topped with a fresh lemony buttercream. And it's all Vegan friendly!

I promise you would never know that these delightful sticky gingerbread cupcakes with lemony frosting were vegan!

Last week I was asked to make some more of my Vegan Black Forest Gateaux Cupcakes. This really boosted my confidence with Vegan baking and this time I tried them. And they were lovely! Really tasty. So when I received another order for some cupcakes this week and a request for some to be Vegan I was more than happy to try a different flavour.

I asked Kieron to flick through the Vegan Cupcake Book and he chose these – Sticky Gingerbread Cupcakes with a Lemony Buttercream. And they are pretty festive too!

Ingredients for the Cupcakes: When these were cooled and frosted I added a piece of crystallised ginger and took one into the lounge to share. Wow. We are converted – Vegan Cupcakes CAN be amazing! And they are so easy to make. The sponge was really flavoursome and sticky and the lemony frosting worked really well with it.

« #TheInThing How to host a girls night in!
Easy Lemon Cupcake Recipe » 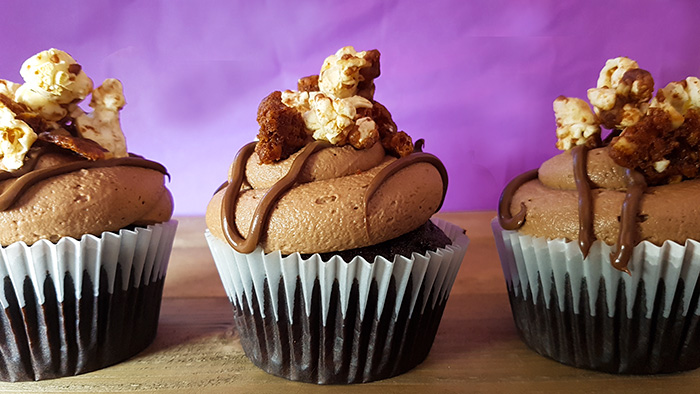 While away with work recently, I was faced with the hotel breakfast buffet. And in this particular buffet there were Nutella muffins. And yes..I indulged and remembered my love for Nutella. So when the Scranline featured a Nutella Popcorn cupcake on Instagram I knew I had to try them. I have a favourite chocolate cake…