Wow…I’ve had a full week of baking this week so had a pick of things to blog about today. But I have to choose the cupcakes I made for my good friends 30th birthday celebrations.

My friend loves playing games so for her 30th she decided to arrange a scavenger hunt all around Bournemouth. We had 5 teams of 5/6 and we all had a long list of (odd) things we had to photograph or take back. In the evening we had more games and a buffet where we were all asked to bring specific things. We were asked to take sweet baked goods so I settled on chocolate marshmallow cupcakes and carried on her theme with the decorations.

This was the invitation… Cupcake and buttercream icing was taken form the Hummingbird bakery cupcakes and muffins book. The marshmallow filling was taken from a great blog – American cupcake abroad.

Ingredients for the Chocolate cupcakes:

While the cupcakes are cooling make the marshmallow filling:

Ingredients for the filling:

Method for making the filling:

Ingredients for the vanilla buttercream:

Method for making the buttercream:

Obviously you can decorate these however you want to, but this is how I did mine –

ROADS – I used a dark brown sugar paste to create the roads. I rolled it quite thin and cut a long strip out. Then I placed this on the cupcakes to make a round road. A lighter brown was then used for the markings.

GRASS: I used a Grass nozzle to create the grass with the vanilla buttercream.

PEOPLE: I bought some miniature figures from ebay and placed them on the cakes. They stand well in the grass.

BLUE CIRCLES: These were made using blue sugarpaste. I rolled it out and cut it using a cookie cutter. Then I wrote on it using edible icing pens.

(Our team came second if you were wondering!) 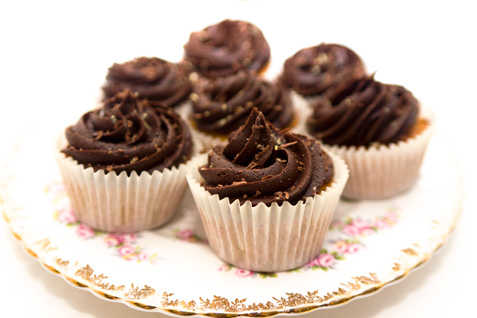 Today I had the urge to bake some cakes but I didn’t want to head out to the supermarket to get any ingredients. So I sifted through my recipe books to try and find a recipe where I already had everything I would need. As luck would have it, I stumbled upon this recipe for…