My Little Pony Birthday Cake
By Rachel Howard on 10/25/2015
A My Litle Pony bursting through a rainbow - a how to guide!

It’s that time of year again…it’s Paige’s birthday! And this year she gave me a challenge…

A My Little Pony bursting out of a rainbow with wings!

That’s some imagination! And I was quite excited about this. So excited that I forgot the wings…ooops! This was such a fun cake to decorate and it was great to be able to use bright colours and a bit of creative thinking. At times I thought it wouldn’t work, but my husband kept telling me to have more faith. And it worked out absolutely fine and even held up in the car journey to the party. For some reason I’m not too good with victoria sponges. I just struggle to get them light and fluffy. And the first time I made these I managed to undercook them so had to start again. This time I think I slightly overcooked them just to make sure they were cooked through so they may haave been slightly dry…just an excuse for the adults to wash it down with a cup of tea! I made this in two separate batches so halved the above ingredients to make each cake:

Ingredients for the buttercream I made the Pony from flowerpaste a few days before so it had time to dry and harden. I used pieces of dried spaghetti to hold the legs and head onto the body. As a guide I used this video. This helped me with the basics. I also made sure I had a figure in front of me to use as a reference.

When it came to putting the cake together, I did the following: I then used the remainder of the rainbow fondant and rolled it up to write out Paige.

I’m so happy with how this cake turned out in the end – I had it in my head the whole time and whenever I tried to explain it to anyone it sounded crazy. It’s quite a hard cake to explain….I need to remember to take photos as I go when I do anything like this! I hope this inspires you to make something fun! 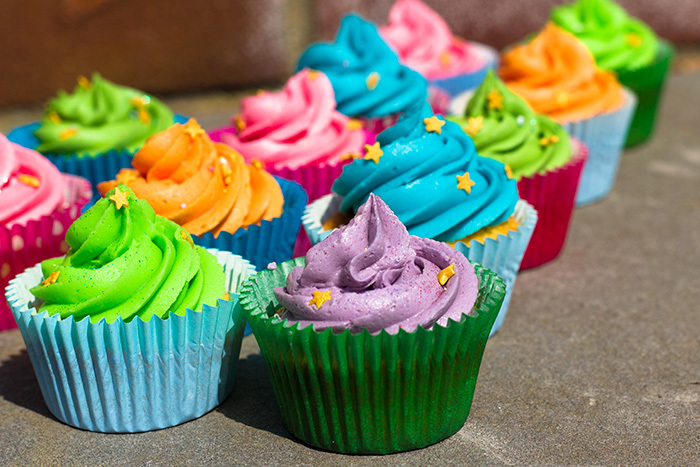 Happy Sunday! These deliciously simple vanilla cupcakes look great and taste delicious. I have had a lovely weekend – after a sad few weeks it was great to get out and about with friends and the weather has been amazing. On Saturday morning I set about baking 36 bright vanilla cupcakes for a child’s birthday party….