It’s been a long week – work has been full on, we’ve had dinner at my mums for her birthday, my husbands car battery decided to give up so we’ve been sharing my car until the new one arrives, my nan has been in hospital and has had two operations and then we had our three year old nephew for a day and night (We took him to The Tank Museum. We were on the way there and he said “I hope there will be some big fish with little tails”...we told him there wouldn’t be any fish there and he said “but fish live in tanks”…bless him!). So by today I was ready for an easy day and wanted to make a cake that was quick and simple to make yet full of flavour.

After our trip to the Hive Beach Cafe last week and trying some rhubarb cake I decided to make my own. My traditional Dorset apple cake recipe is a popular recipe on the blog so I thought a rhubarb crumble cake would also go down well. Comfort baking at it’s best! There are lots of different types of recipes out there, but this one seemed to resemble the one I had last week the best. The smell that this cake fills the house with while baking is amazing. I really had to control myself while waiting for it to cool. It was worth the wait – fruity, moist and the rhubarb gives it a great kick of flavour.

I will definitely make this again as I think my family will love it! Rhubarb is a popular constituent of GI diets. It is low in carbohydrate, high in vitamins and is also thought to speed metabolism and aid weight loss……reason enough to make and eat this cake!!! 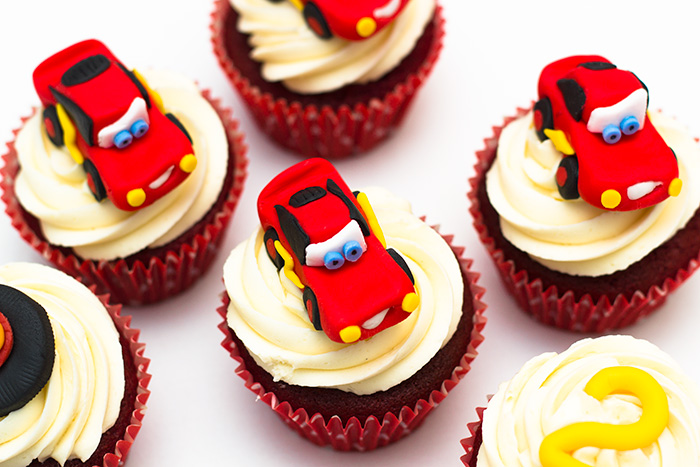 These delightful cupcakes were simple to make and look great at a party. I was asked to make some for a little boys 2nd birthday and I hope he enjoys them! Not having any children ourselves, I love the challenge of making children’s birthday cakes. I totally understand that some mums think it’s important to…